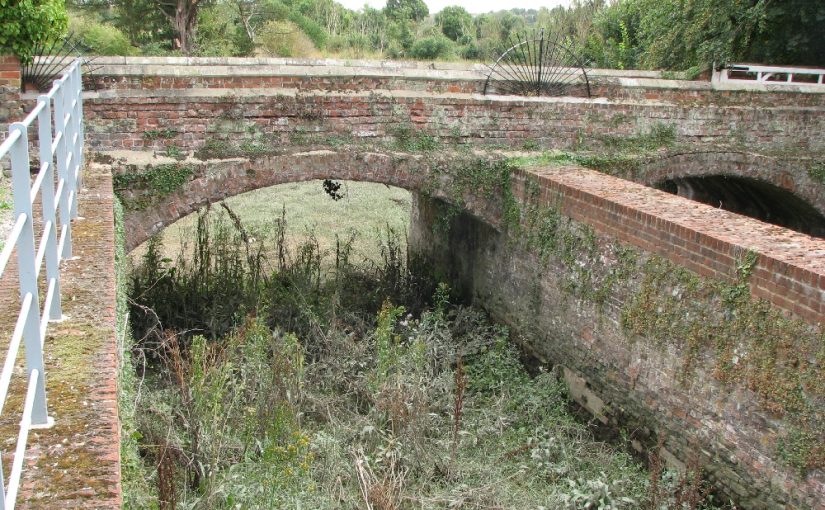 The docks are on the tidal side of the mill and barges, or more likely lighters, could only reach, and leave the mill at high tide, but probably not on very high tides.

In Volume 1 of the General View of the Agriculture of the County of Essex, published in 1813, reference is made to barges being brought under the mill for loading and unloading the sacks.

The purchase of the mill by Joseph Ward, in 1834, included two barges. These were probably the Beeleigh (built 1818, 51 tons) and the Maltster (built 1807, 40 tons), which were insured (1818) with the Essex & Suffolk Equitable Insurance Society as belonging to Beeleigh Mill. This stated that they were complete with their rigging.

In 1838, another barge was launched, as this entry in the Essex Standard stated –

On the 4th inst. A fine sailing Barge was launched at that most beautiful and romantic spot, Beeleigh Mill, Maldon, the property of Mr. Joseph Ward. A large concourse of people assembled to witness it; as soon as she began to start, Mr. C. Hurrell named her as is usual, with a bottle of wine, the Rogue in Grain, after which Mr. Ward’s room was thrown open to about 40 ladies and gentlemen, who sat down to a cold collation; his millers, shipwrights, and others, to the number of 30 also partook of a cold collation, and after spending a pleasant evening, the company separated highly delighted.

These barges were almost certainly sea-going vessels, which would have transferred their cargo to and from lighters for movement to the mill.  All three barges are reported with other owners in 1880.

This extract, from an article on the Chelmer and Blackwater Navigation, gives an idea of the size of a lighter –

The total length of the waterway was 13.75 miles. This included a number of cuts around the various mills and thirteen locks, built to accommodate lighters 60 feet long by 16 feet wide. The reason why these dimensions were chosen is somewhat uncertain, but it is possible that they were built so that the navigation could be used by lighters already in common use on the estuary. The horsedrawn boats were completely open, flat bottomed, carvel built and incorporated many of the constructional details of Thames barges. Despite having a draught of only two feet, twenty five tons of cargo could be carried on every vessel. At Heybridge Basin, the sea lock was built large enough to allow brigs and other sailing craft to enter the Basin.

The report of the fire in 1875 states that two lighters, which were in the docks, were destroyed.

As can be seen the river is heavily silted, as are the docks. This is mainly because the flow of the river Chelmer has been diverted around the mill. It is estimated that the silt could be as much as 2 metres deep.

Compare this with a photo on the Mills Archive web site, taken in 1951.